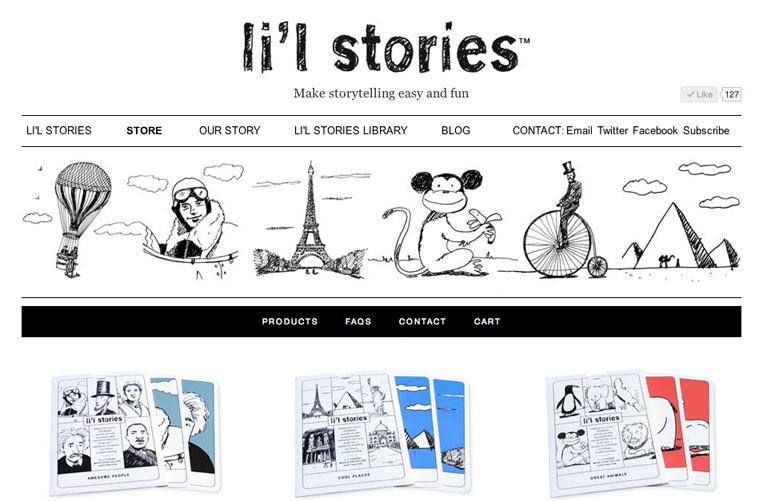 Launching an independent product and selling it online has been made remarkably easy thanks to the e-commerce platforms Shopify and Big Cartel. Both platforms are easy to implement and use, and are particularly well suited to designers and artists: Shopkeepers can choose the templates for their “storefront” or customize their sites with their own designs. The platforms help with complexities like multiple languages, handling payments and transactions in local currencies all over the world (not to mention taxes), and other needs like mobile commerce, SEO and marketing, and customer support. (Both platforms were developed by entrepreneurs who started out trying to sell their own products online: Shopify was started in 2004 by co-founders who opened an online store for their snowboarding equipment, while Big Cartel, which we use for Li’l Stories, was launched in 2005 by a co-founder who wanted to sell his band’s merchandise.) 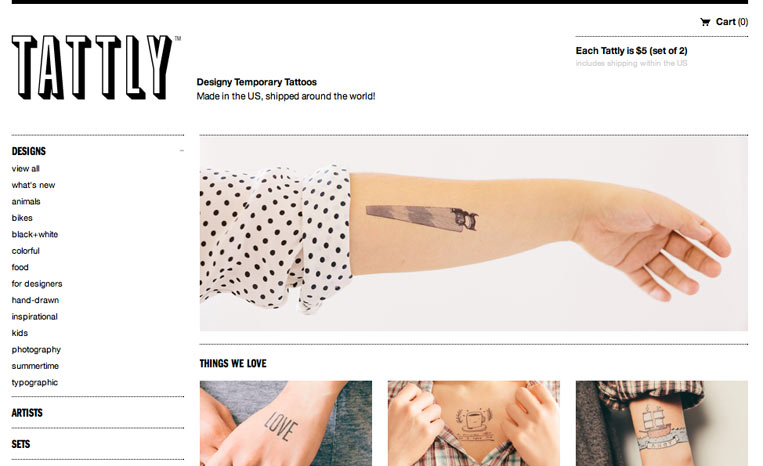 Some designers have launched their products as full-fledged businesses or brands apart from their studios, finding online success that has led the products to be carried by brick-and-mortar stores. One of the most successful has been Tattly, the line of “designy” temporary tattoos introduced by the designer and blogger Tina Roth Eisenberg, aka Swiss Miss. Eisenberg was inspired by her daughter Ella, who kept coming home with unsightly temporary tattoos; Tattly designs are created by artists, illustrators and designers, who get a cut from the sales. Eisenberg opened the Tattly online store using Shopify in 2011, and the sets are now sold in over 400 retailers around the world, including MoMA, Urban Outfitters, the Land of Nod and J. Crew’s crewcuts. 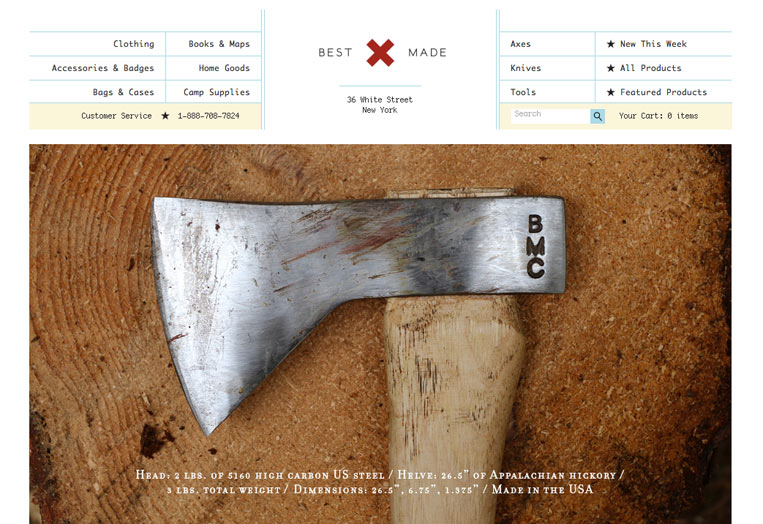 Peter Buchanan-Smith honed his love for a good axe during his formative years in Northern Canada. In 2009 the designer started selling his own axes online as Best Made Co. The line has since branched out into other products and accessories for the outdoors, including clothing, camp supplies, books and maps, and the company opened a physical store in Tribeca in 2012. 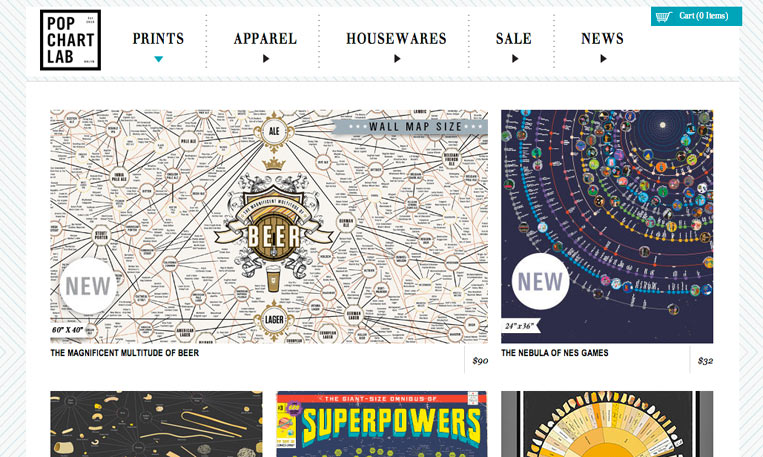 The book editor Patrick Mulligan and graphic designer Ben Gibson took a shared obsession with mapping common objects, natural phenomena, and assorted cultural ephemera and formed  Pop Chart Lab, a company that creates exhaustive charts, diagrams and other visual compendiums of artifacts like varieties of beer, culinary tools, rap names, sneakers, cheese, pasta, coffee, bicycles, guitars, haircuts, eyewear, cameras and pretty much everything else you can think of, rendered as prints, posters, t-shirts and housewares. First launched on their own site in 2010, the company’s products are now also carried by various retailers and gift shops. 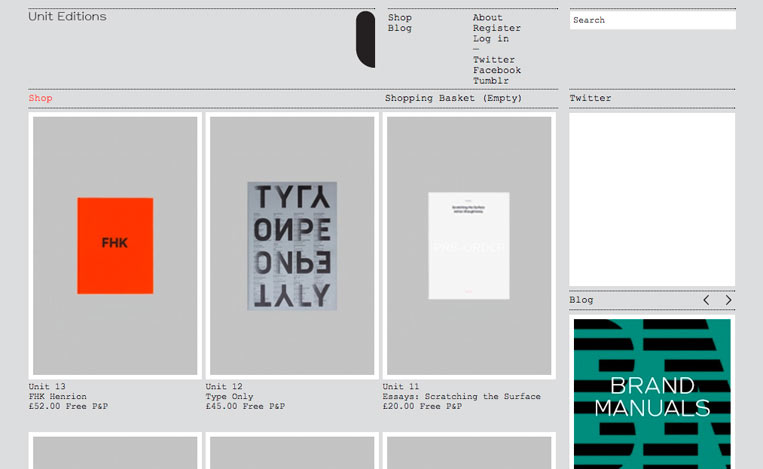 Print has always been a favorite medium of graphic designers, and even as books and magazines have been eclipsed by digital media, many designers are expressing their love for paper-based forms by starting new publications—and selling them online. The designers Tony Brook (Spin) and Adrian Shaughnessy (ShaughnessyWorks) joined forces to create Unit Editions, an online publishing venture that issues “books for designers by designers” that might fall outside the scope of more commercial publishers. The series has included monographs on Herb Lubalin, Wim Crouwel, and FHK Henrion, as well as topics like supergraphics and design that solely uses typography. Lavishly produced, the limited editions are becoming collector’s items for designers. 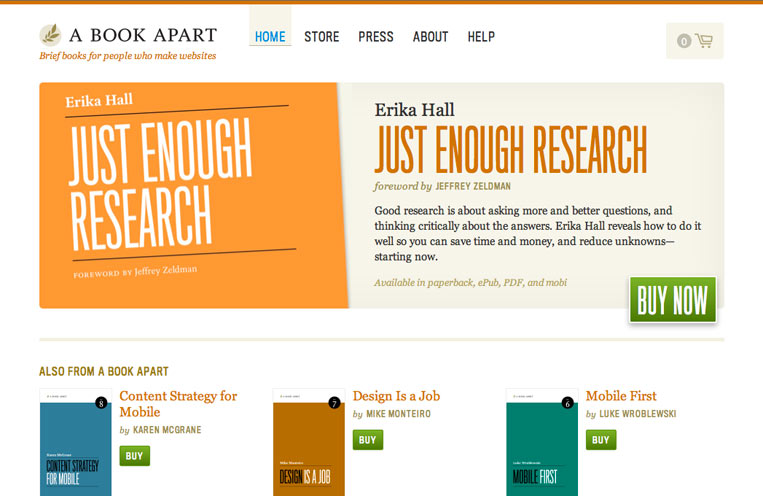 Sensing a need for straightforward writing on highly technical subjects, the group of designers and developers behind the web development site A List Apart established the publishing imprint A Book Apart to publish books on web design that were accessible and easy to understand. Overseen by Jeffrey Zeldman, Jason Santa Maria and Mandy Brown, the concise books of about 100 pages (“because working designers-developers can’t afford to waste time,” in the words of the publishers) cover topics like coding, content strategy and responsive design, and are available as print and ebooks sold from a Shopify-powered site. 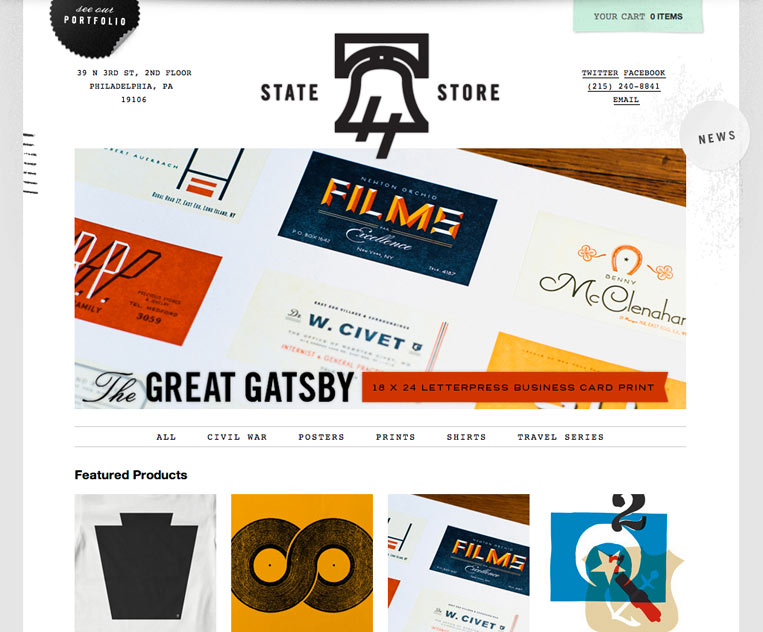 Finally, some designers are creating products as a natural extension of their studio work, creating product lines that make their most popular designs commercially available, or that expand their existing designs into new directions. The Heads of State (Jason Kernevich and Dustin Summers) in Philadephia sell their bright, colorful designs as limited edition prints, posters, and t-shirts, including series inspired by the historical ephemera of the Civil War and the golden age of travel. In 2012 the pair expanded their love for travel graphics into a new store, Pilot and Captain, that features designs created for specific cities. 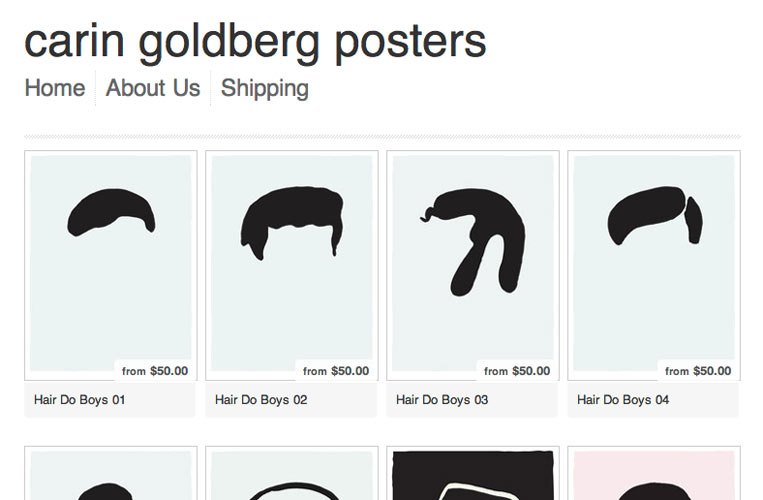 The renowned graphic designer Carin Goldberg was frequently asked if her posters were available for purchase. In 2012 she launched Carin Goldberg Posters (using Shopify), where fans can purchase over 60 iconic designs, some originally created for clients, others as personal explorations of various topics, like her series of graphic hairdos (for boys and girls) and silhouettes of historical superwomen. The museum-quality prints are created using archival inks, and most are available in three sizes. 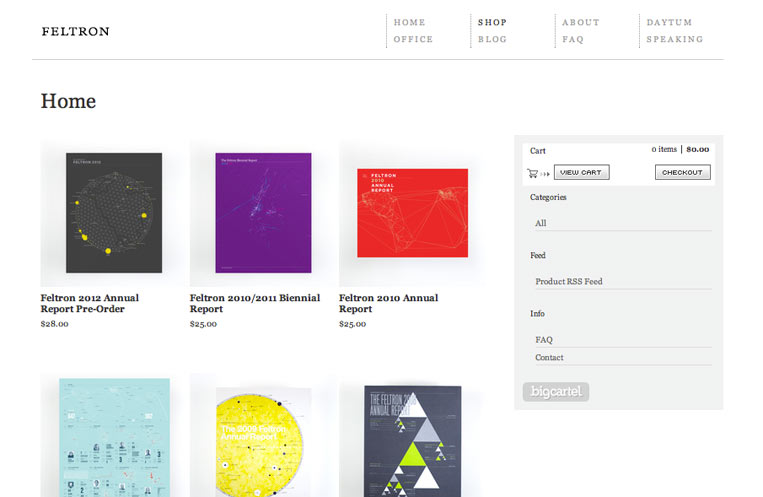 In 2005 the infographics designer Nicholas Felton began designing the Feltron Annual Report, a “personal annual report” that documents, quantifies and visualizes all his activities for the year—the restaurants he visited, the movies he watched, what he did in an average day, topics of conversation—as well as different aspects of his life. (The 2010 edition was a portrait of his father as told through data.) The reports have become highly sought-after objects in the design community, and Felton makes them commercially available from his site (powered by Big Cartel) in a limited edition that quickly sells out.

Whatever the end product, the projects initiated by all of these designer-entrepreneurs have given them another opportunity to explore and express their individual vision of design—this time, for themselves.