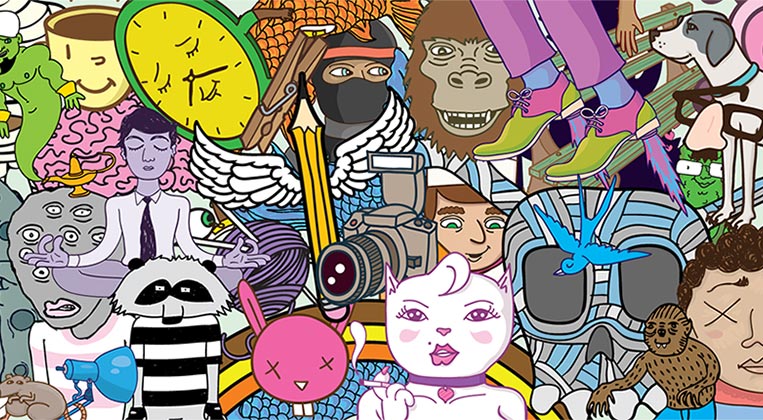 Our recent design work focuses on education (read the latest on Li’l Stories here), and a big part of what we do involves getting kids to love reading. It goes without saying that we love reading as well—and it’s most definitely not all for work. We’re always looking for new books that will help us discover a fresh idea or give us a different perspective on the world. For this edition of our annual reading list, we asked our colleagues at Civic Hall, the collaboration center for civic tech innovators in New York, if they could recommend any titles that resonated with them over the past year.

The selected books explore subjects as varied as creativity, business and how to evolve the workplace to make it better for women, to time-traveling thrillers and a personal memoir about the impact of race. The suggestions may give you a few gift ideas just in time for the holidays, or a title to get lost in during a little downtime.

When we were putting together this list over the past month, we were expecting a very different outcome to the presidential election. The results have been a shock, and if we assembled another list right now it might be very different. But we like to think that whatever challenges the world holds in the coming years, we’ll always be able to find refuge, and inspiration, in a good book. In this spirit, we’d like to share our 2016 list. You can also find the selections on our bookshelf.

Consider the Lobster and Other Essays by David Foster Wallace.
A collection of his essays/exposition that is at once mind-blowingly personal, insightful and delightful (read: hilarious). A few highlights include (a) the ethics of boiling lobsters live, (b) experiencing the adult entertainment industry awards night, and (c) a poignant and timely reflection on a week spent with the McCain 2000 campaign.

The Three-Body Problem by Cixin Liu.
This science fiction novel—the first translated from Chinese to win a Hugo Award—is a mind-bending romp through Cultural Revolution-era China and a modern day world plagued by the mysterious deaths of leading scientists.

11/22/63 by Stephen King.
Small-to-moderate spoilers ahead: 11/22/63 takes a unique perspective on time travel and its effects on history. Especially interesting were the ideas that history will resist changes (a neat explanation for “destiny”) and how the “butterfly effect” plays out as the protagonist makes small and large historical changes during several visits to the past. The characters are very well developed and the writing is immaculate. The plot is far-fetched, but kept me thinking throughout… so much so that my next read is going to be Robert Dallek’s biography of John F. Kennedy.

The Good Jobs Strategy: How the Smartest Companies Invest in Employees to Lower Costs and Boost Profits by Zeynep Ton.

Broad Influence: How Women Are Changing the Way America Works by Jay Newton-Small.

What Works: Gender Equality by Design by Iris Bohnet.
I highly recommend all four of these books—all written by women, and all relevant to how to continually evolve the world and its workplaces into better places for everyone.

Do Androids Dream of Electric Sheep? by Philip K. Dick.

Not as Far as Velma: A Henri Castang Mystery by Nicolas Freeling

Nancy Vitale, Partner, Partner, Eyes Up Here Productions
Two books that have definitely influenced what I’m up to:

The Gift: Creativity and the Artist in the Modern World by Lewis Hyde.
This book just changes the way you think about your place in the world and the basis of reciprocal relationships.

One Man’s Meat by E.B. White.
A series of short essays and musings that White wrote while on his saltwater farm in Maine during World War II. It’s really an exploration of what it means to build a life, to escape insanity, and to appreciate nature in a wholly new way.

And I can’t wait to get to Amanda Palmer’s The Art of Asking: How I Learned to Stop Worrying and Let People Help, which you had on last year’s list!

Creativity, Inc.: Overcoming the Unseen Forces That Stand in the Way of True Inspiration by Ed Catcall and Amy Wallace.
I really thought this book was great. I don’t usually read “business/management” books. But I really enjoyed this one, because it was a fun read and very relatable. It’s by one of the founders of Pixar and talks at length about how they manage creativity.

TED Talks: The Official Guide to Public Speaking by Chris Anderson.
This book is a fine read. As a speechwriter and someone in the TED orbit, it sharpened my thinking about design for public speaking. Chris believes that we should think of a talk as a “gift” for our listeners.

Ready Player One by Ernest Cline.
Ernest Cline’s Ready Player One is a fantastic romp in speculative fiction. The film adaptation will be one of the big releases for 2017. Filled with ‘80s nostalgia and predictions about a future that’s only a handful of heartbeats away.

Throwing Rocks at the Google Bus by Douglas Rushkoff.
Essential reading if we are to design and co-create for today.

Between the World and Me by Ta-Nehisi Coates.
This memoir is a painful, necessary read about race in America.

The Craving Mind: From Cigarettes to Smartphones to Love—Why We Get Hooked and How We Can Break Bad Habits by Judson Brewer.
A preview: I did some early work on this book that will be published in March 2017. A fascinating mix of neuroscience and Buddhism on how to stop bad habits—and create good ones. For those who enjoyed Daniel Kahneman’s Thinking, Fast and Slow.

Julia Haselmayer, Partner, Citymart
There were a few books I truly enjoyed reading in our book club this year:

The Goldfinch by Donna Tartt.

The Son by Philipp Meyer.
This fascinating book tells the story of an American family over three generations in Texas.

A Little History of the United States by James West Davidson.
This non-fiction book is a great overview of American history told in stories rather than by dates.